Jonathan was born in London and read music at Bristol University where he won both university undergraduate and British Academy postgraduate arts scholarships. He studied conducting with George Hurst since when his career has been built almost exclusively on opera. He is an Associate Artist of Longborough Festival Opera where he has conducted a critically acclaimed Janáček cycle: Jenůfa, Katya Kabanová and The Cunning Little Vixen. Also for LFO: A Midsummer Night’s Dream, Tosca, La bohème, Falstaff, Madama Butterfly, Albert Herring, Rigoletto, The Barber of Seville, The Marriage of Figaro, La Traviata, Don Giovanni and Eugene Onegin. He has conducted regularly for West Green House Opera since 2000, most recently Ariadne auf Naxos, The Marriage of Figaro, Un ballo in maschera, Madama Butterfly, Les Contes d’Hoffmann, The Merry Widow, Britten’s The Beggar’s Opera, Bernstein’s Candide and Sondheim’s A Little Night Music.


He is Music Director of Opera Project, which he co-founded in 1993 and with whom he has conducted much of the standard repertoire at theatres and festivals across the UK. In 2016 he was appointed Music Director of Mid Wales Opera for whom he has conducted Eugene Onegin, The Magic Flute, Tosca and Semele. In addition to conducting Jonathan has created some twenty reduced orchestrations of operas that are now performed widely across Europe, Asia, the USA and Canada, and his chamber arrangement of Walton’s The Bear will shortly be published by OUP. He lives with his family in North-West Herefordshire.

​We are delighted to welcome Jonathan to Ludlow Orchestra!

​Clare was first taught to play the violin by her father and went on to study both violin and piano as a Junior Exhibitioner at the Royal Academy of Music. She was very active in music-making at Cambridge while reading Theology at Clare College before completing her postgraduate performance studies at the Royal Academy of Music. Thereafter she taught violin in various London schools before spending five years as Director of Music at Durston House School.

Since moving to Shropshire in 2010 she has worked as an instrumental teacher for the Shropshire Music Service and now teaches privately. As well as being leader of the Ludlow Orchestra she also leads the Shropshire Chamber Orchestra, plays in the Eroica Camerata and gives regular chamber music recitals. She has been Music Director of the Church Stretton Arts Festival since 2016. 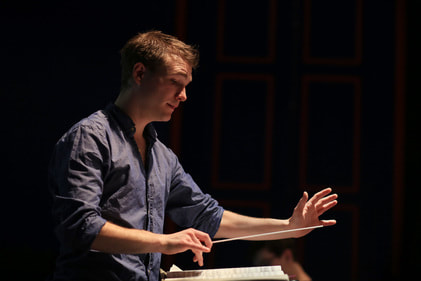 Thomas has established himself as a sought-after conductor in many genres. Currently Musical Director of Leamington Sinfonia, The Ludlow Orchestra and Shrewsbury Cantata Choir he enjoys regular guest conducting appointments with Salomon Orchestra, Leamington Chamber Orchestra and many other ensembles. This Autumn will see him work with Sinfonia of Birmingham and pianist Di Xiao.

In addition to symphonic conducting Thomas has recently been Assistant Conductor for Birmingham Royal Ballet on their Anniversary commission of 'The King Dances' for BBC4. He is also conducting the World Premiere of the ballet Snow White by Leon Huxby for new dance ensemble Collective 31.

Opera has always been at the core of Thomas' output and last season he was appointed Assistant Conductor for British Youth Opera's production of 'English Eccentrics', conducting Southbank Sinfonia at The Peacock Theatre. Recently he has produced semi staged performances of Don Giovanni, Hänsel and Gretel, Savitri and Dido and Aeneas as well as scenes from Britten's Peter Grimes, A Midsummer Night's Dream, The Turn of the Screw, Owen Wingrave, Albert Herring and The Rape of Lucretia.